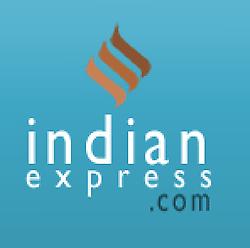 On SH Raza's canvas, the cosmic bindu appears as the seed of all creation; in a recently launched line of branded jewellery, however, it is an emerald drop in an 18 carat gold setting, encircled with herringbone triangles, engraved with meenakari and framed with rose cut diamonds. Available in Orra stores, the jewelled version of the Parisian artist's sketches might not lend itself to the intellectual discourse that his original does, but it does enable one to wear a Raza.

MF Husain had set the precedent a decade ago with a limited edition Parker Sonnet Husain fountain pen engraved with scenes from his movie Gajagamini, but it wasn't until the past few years that artwork in India started travelling from artist's studios to designer houses and being marketed as products. It, of course, takes an art connoisseur to admire British artist Damien Hirst's paint-spattered jeans that were available in neighbourhood Levis stores last year.

"The concept of art multiples is still taking off in India. The collaboration between an artist and a fashion house enables art to reach more people," says Jiten Thukral, of the artist duo Thukral and Tagra. At the Pushp Vihar weekly Monday market last week, the two erected a stall to sell plastic slip-ons promoting safe sex. In 2005, their art appeared on limited edition Benetton T-shirts, and the Mac in their Gurgaon studio has digitised artwork designed for the travel firm Kuoni. Photographs of travellers who attended an expedition from Himachal to Kolkata with Kuoni last year are projected against dream-like patterns that have appeared on the duo's canvases.

"The customers for products created through such collaborations are not restricted to those familiar with the artist. For instance, the Raza pendant is also a beautifully designed piece of jewellery," says Vijay Jain, CEO, Orra. He adds that it took three years to design the gold pendants launched in 10 patterns, each in a limited edition of 10. Enclosed in a leather case, with an authentication certificate from the artist and a booklet on him, the pendants are priced from Rs 3.5 lakh to Rs 11.5 lakh.

For the artist, the partnership entails stepping into an unexplored medium. "It's quite a challenge to create something outside one's comfort zone, particularly for an out-and-out commercial venture. You need to understand the dynamics very well," says artist Manisha Gera Baswani, who had collaborated with home décor brand Good Earth for a range of ceramic plates for a limited edition collection soon after the brand's launch .

The global reach of Indian art, meanwhile, has international brands calling on Indian artists. In 2008, Thukral and Tagra drew an illustration for the Puma reality bag, a range that also featured artwork by 100 artists from across the world. In the same year, Fendi selected Delhi-based artist Subodh Gupta to be a part of a group of 10 international artists to launch a limited edition series that celebrated 10 years of their famed baguette.

Gupta's trademark utensils appeared on the white Fendi baguette. In fact, labels like Fendi have been at the helm of collaborations with artists. At the Salone Del Mobile, last year, the annual international furniture fair at Milan , Fendi hosted Craft Punk, a series of design performances, again in collaboration with young artists. "Fendi is a creativity factory that supports talent without boundaries. We wanted to rediscover the power and the beauty of 'Fatto a Mano' (Hand-Craft). We strongly believe that creativity and the flow of ideas are the fuel for the future. Forever," said Silvia Venturini Fendi, creative director, Fendi accessories.

The fine print is important though, warn artists. "The copyright of the artwork should be discussed in detail," says Thukral. Mumbai-based artist Sudarshan Shetty adds that the project "should be exciting". In February, his installation Mason of Shades was placed outside the Louis Vuitton store in Milan in Italy during the fashion week in the city. An airport kiosk look was achieved by putting together 740 sunglasses of the brand. While the installation is set to travel to the brand's stores across the world, Shetty is not sure if he will be game to design accessories for the brand. The possibility is not implausible though. After all, Louis Vuitton has famed collaborations to its credit, including handbags by Japanese artist Takashi Murakami and the American Richard Prince.